Oromio Support Group Australia (OSGA) has worked with DAA for many years. Through mutual hard work and enjoyable cooperation, OSGA was given official consultative status by the United Nations Economic and Social Council, which means the organisation can directly report to different UN bodies as an official source of information on human rights abuses in Ethiopia. OSGA is the only Oromo diaspora organisation in the world to have this honour.

This article focuses on Lensa Dinka and Marama Kufi, two of the founding members of OSGA. 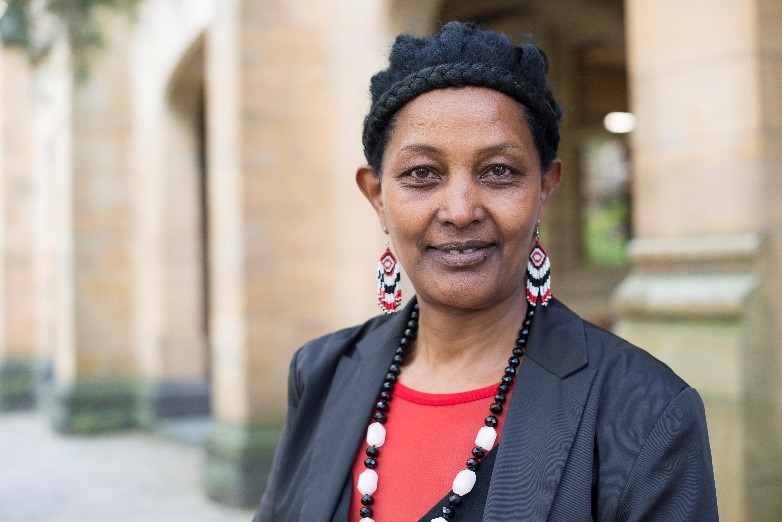 Lensa Dinka is a passionate advocate for her people, the Oromia, in Ethiopia. Picture by Lara McKinley

“The issue burns me from the inside”

How the Oromia people in Australia founded a group that now enjoys consultative status at the United Nations, able to officially report on human rights abuses in their home country of Ethiopia.

Married couple Lensa Dinka and Marama Kufi make a formidable team. Since arriving in Australia in 1999, the pair has worked tirelessly to expose the human rights abuses inflicted upon their people, the Oromia and are officers of a small yet highly effective diaspora organisation, the Oromia Support Group Australia (OSGA).

Lensa explained: “Oromia are the majority of the people in Ethiopia but do not have any voice, political rights or any freedom of speech. People are being killed voicing human rights issues.

“The issue burns me from the inside,” she said.

A presentation given by Marama at the Diasporas in Action conference clearly highlighted why: in slide after slide he bore witness to the murder and torture of his people — reports the OSGA continue to receive daily.

Finding a forum to present these findings wasn’t always easy, Lensa said. “For ten years we tried to do something for our people, for Australian society to understand our issues, but we couldn’t get anywhere.

“For ten years we tried to talk to everyone but it wasn’t until we connected with Diaspora Action Australia (DAA) that we started to make progress.

“We started getting in contact with government bodies, with NGOs and our calls [reached] people who had never heard about us,” Lensa said. Marama also noted appreciatively that through various DAA workshops and mentoring programs, the OSGA has gained invaluable skills in communications, organisational management and leadership.

In July last year the OSGA were given a special consultative status by the United Nations Economic and Social Council. This means their group is regarded as an official source on human rights abuses in Ethiopia. They are the only Oromia diaspora group in the world to have this status.

“Now we can go to the next level,” Lensa said. “I want to say thank you to the big, beautiful strong [DAA team]. Thank you is not enough. Your work is going somewhere, the fruit that we are seeing now.”

Marama agreed and said that his experiences at the Diasporas in Action conference have deepened his thinking, helped him build valuable connections and gave him practical solutions.

“This conference really reinforced how important it is for diaspora communities to network with a variety of other organisations. We have to really learn what each other is doing in order for us to become more effective.

“We were able to make very valuable contacts: we spoke with Amnesty International staff, an officer from the International Organisation for Migration, as well as with many presenters, speakers and various agency delegates.

“We found the conference very inspiring, and we were moved by the participants’ determination to go back to their original country to make a change.

“I was also heartened to see presentations by young people. After all, we’re all in the same boat. If the boat sinks, we all sink.”