“Sport for Peace” in South Sudan: Play Sports, not War

Imagine a world where rivalries are settled through sporting competitions instead of violence. Wishful thinking? Not at all. Our longstanding colleagues at Peace Palette, a non-government organisation based in Twic State, South Sudan, and Melbourne, Australia made it a reality. 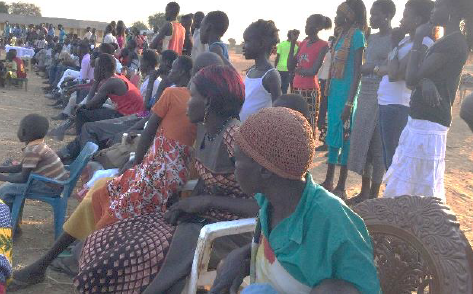 From 27-29 December 2017, Twic State underwent a fundamental transformation: where there was usually conflict and violence due to cattle raiding, or over grazing lands and water supplies, there was suddenly an atmosphere of vibrant expectation. The old and the young, girls and boys, together over 3,000 people from four neighbouring states, came to witness the Peace and Reconciliation Basketball League (PRBL) on the legendary basketball court built by former NBA player and peace activist the late Manute Bol.

However, even though the event was designed to bring the different communities together in an entertaining event, it was not all just fun and games. Before starting the tournament, participants engaged in a specially designed peacebuilding workshop, which aimed at promoting the harmonious coexistence within and beyond Twic State. Furthermore, young people were trained to be peace ambassadors carrying the message to their communities. The training covered topics ranging from causes of conflict, theories of change and the importance of listening and effective communication, to the challenges in their own communities and towns as well as core values such as love, unselfishness and forgiveness.

The response was overwhelmingly positive: “I was able to meet other young people from different states and discover that we face similar issues. Now we just need to find ways to overcome those issues together”, said one of the participants. Peace Palette acknowledges the capacity of young people to initiate change, which is crucial when considering that they are the next generation governing the country. Furthermore, “Sport for Peace” has the capacity to divert their engagement from criminal activities into sports and create an opportunity to maximise the potential of young and energetic boys and girls. 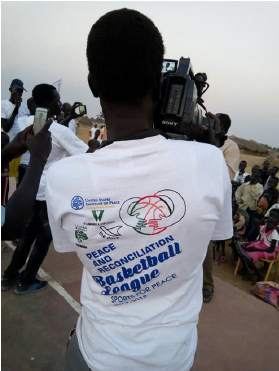 As a special highlight, the event was broadcast live by the South Sudan National TV to deliver the message of peace across the entire country. The day concluded with a traditional ceremony, again reinforcing the sense of belonging that was the guiding spirit of the entire event.

“We, the young people, deserve better. Our future is in jeopardy because of this senseless war.”

Sometimes change starts with a small step or, as hopefully in this case, with a basketball game and lots of determination to create a brighter future for everyone.